This salt water crocodile right in front of our harbor in the Bay of Balikpapan, estimated to be 6 meters long, a few days ago killed the 3rd person within the last 11 months. The picture was taken on October 17th and two weeks later he struck again. In the past, we had an average of one person per year or even one and a half year killed by crocodiles around the Arsari Enviro Industri area. But with the ongoing expansion of coal and other industry destroying the crocodile habitat in the Bay of Balikpapan many of them seem to migrate further up the bay where we are protecting the remaining good mangrove habitat around our base camp compound and reforestation area. Crocodiles are very territorial and the salt water crocodile is especially known to be very aggressive. They are even known to kill smaller crocodiles as I unfortunately witnessed in the animal rescue centers that I built where we tried to put more of the confiscated individuals in the limited space available.

Over the almost 38 years I have been in East Kalimantan the occurrence of people getting killed by crocodiles seems to increase steadily. In the past, we made use of the fear of crocodiles to protect the Sungai Wain forest near Balikpapan, the main source of water for the Pertamina compounds and refineries. We gave a home at the forest entrance to a man with one leg, who would tell anyone passing by not to go through the swamp because there were “hundreds” of vicious crocodiles like the one that bit off his leg.In the meantime this seems no joke anymore. Here are two more examples of crocodile victims this year and there are many more if one goes through the many local newspapers and their websites in Kalimantan. This victim’s name in the picture on the right was Syarifuddin. He was caught by the crocodile while swimming in a nearby river to the north of our area a few months ago. 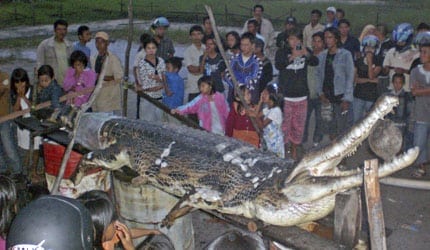 A man pulling logs in the river named Kadepi Panu (47) was eaten alive by this crocodile in Central Kalimantan. His remains were recovered from inside the stomach of the crocodile three days later after he was killed by a local expert. The gruesome pictures of body parts being retrieved from crocodile stomachs regulary feature on front pages of local newspapers as seen in the display below.

The problem is not just in Kalimantan. In North Sulawesi, our Masarang Tasikoki wildlife rescue center regularly receives requests to come and remove dangerous crocodiles from various places. A particularly big one that regularly takes big cows along the Amurang swamp is still on the loose.

Near the Arsari Enviro Industri area where we are implementing the experiences of the Masarang Foundation on a massive reforestation scale the local people are still very accepting of the crocodiles. The last victim, a father who was placing a fishing net in the river with his two sons was pulled under by the huge man-eater in front of his sons. Soon rumors went around that he had spoken badly of the crocodile before and that that was the reason he was taken. Ceremonies were held speaking to the crocodile to appease him and the local people of nearby Mentawir actually believe this to work. But if the killing continues their patience and acceptance may run out.

Because of the increasing number of people getting killed we are now trying to built a facility for the giant croc and involve experts in its capture in the Kenangan compound. The area is open to the sea with tidal movements cleaning the area by itself and is almost a hectare large. Leo Hulsker, our wildlife expert pictured here in the mangrove area where the crocodile is roaming, will be working on the issue and coordinating efforts to deal with the situation.